The CXR880 is an electronic self levelling Rotating & Line laser.

The CXR880 Rotating & Line Laser is a fully featured rotating laser for outdoor levelling and grade, it is also a fully featured multi line laser ideal for site layout/squaring and internal fit out and installation. Essentially it is two laser levels in one. For Site levelling simply place laser level on the tripod and press the power button, in seconds it self levels and begins to rotate.  Power up the LRMULTI receiver and switch into rotating mode and you are off levelling.

For site Layout place the laser over you corner using the dot down beam, place the receiver on its side and powered into line mode along the first leg of the 90 degrees.  Power up the laser level turning on the lines and selecting pulse mode.   Using the CXR’s fine rotation knob rotate the unit until the receiver indicates in line then simply pick up the receiver walk round to the second leg of the 90 degrees, when the receiver picks up this second lin you have you 90 degrees. Say good bye to the 4-5-6 triangle and sagging wind blown tape measures.  For the ultimate in Site Squaring check out the CX510SS auto tracking site square laser HERE

The CXR880 rotating & line laser has dual manual grade match so you can set a grade on either or both axis using the remote control, so single person grade setting.  Indoors you have four bright vertical lines which cross on the ceiling for plumb.  A plumb dot down and horizontal is provided by the rotating beam which you can put into scan mode to intensify the beam.

The CXR880 comes complete with Multi function LRMULTI electronic receiver with LCD display which can be switched between line and rotating laser modes.  The CXR880 also comes with rechargeable batteries and charger, but, can also be used with standard “C” batteries or even be powered of the charger/power supply.  Remote control is supplied to switch between features and set grades. 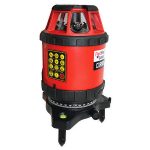 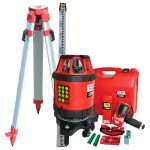 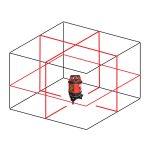 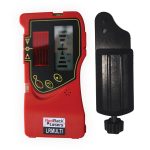 The CXR880 is suitable for just about any task its a true all in one, a rotating horizontal beam give huge 500m range with the receiver and the lines are awesome for site layout and all sorts of internal fit out.

The RedBack CXR880 comes with a 5 Year manufacturers warranty.

All RedBack Laser Levels have been Checked and Calibrated in Australia and come with a FREE certificate of calibration.

Accessories featured in photos or video may be OPTIONAL, at an extra cost. Specifications may change without notice.

Instruction PDF can be viewed, printed and downloaded HERE

Be the first to review “CXR880P – RedBack Rotating & Line Laser, Tripod and Staff – Buy as a Pack”

Enter your email to receive news and new product information

COVID 19 - Some Deliveries may take longer