The Differences between a Dumpy Level and Laser Level

In this post we shall look at the differences between Dumpy Levels and Lasers Levels.  The differences in how they level and operate and more.

First up what is a Dumpy Level and what is a Laser Level?

What is a Dumpy Level

A dumpy level or otherwise known as an optical level or automatic level is a levelling device that uses an operator looking through an eyepiece.  The operator sees a cross hair line which indicates a constant level height across a site.  A second person then holds a staff with a height scale at various points around the site which the operator aims the dumpy to look at.  The operator can read the height off the staff at the various places.  The dumpy can then be used to determine the levelness around the site or mark out level points so as to level the site.

What is a Laser Level

A laser level produces a laser output either as a dot, line or rotating dot.  This laser output produces a level reference for the operator to check a site for levelness.  The operator walks around around the site and checks the height of the laser against a scaled staff.  Indoors the laser line or dot can sometimes be seen on the staff at close range.  Outdoors or a greater range the operator will use a laser receiver that is attached to the staff to pick up the laser’s height. 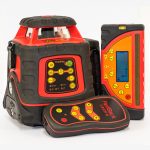 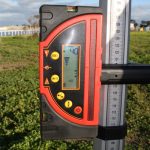 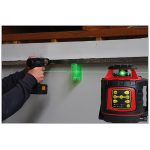 One main key differences between these two methods of levelling if that dumpy levels requires two people to level with and laser levels are single person operation.  This difference is the main reason that most users have moved away from using dump’s to lasers’s. Together with the massive price drops on laser levels over the last 15 years or so.  Technically dumpy’s can be more accurate than lasers.  Saying that both are way more accurate than most builders will realistically work to.

Dumpy’s are still selling but no where near the volume of 10 or 20 years ago.  They are relatively inexpensive, very reliable, very accurate and easy to use, as long as you have two people available.