Comparing Red & Green Laser on RedBack Lasers 2L360 and 3L360 line laser models.  With many laser level manufacturers when they produce a red beam and a green beam version of a laser.  Their red beams are class 2 with 1mW output and their green is 5mW.  With our 360 range both red and green versions are class 3 with 5 mW output.  So the intensity is basically the same from both with the red far brighter than most of our competitors red beam.  The green colour is slightly more visible to the human eye compared to red but saying that when comparing redback 360 range they are very similar in appearance.  Check out the photo below for a guide. 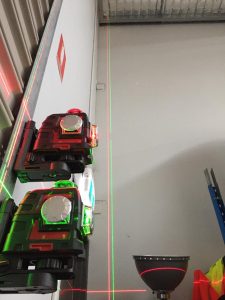 So in conclusion it comes down to personal preference on which colour you prefer.  In terms of performance when it comes to RedBack which ever colour you choose you will get maximum visibility.