What is the difference between a Millimeter Display receiver and a Standard Receiver?

A standard rotating / rotary laser receiver such as the RedBack LR715 indicates when the receiver is either above the level height of the laser plane , below the laser height or exactly on level.  There are a number of bars that give an rough indication of when you are moving the receiver closer to level, but that is it.

A rotating Millimeter display receiver such as the RedBack LR720 provides the same information as the standard receiver.  However, in addition it display how many millimeters above or below the level line the receiver actually is. 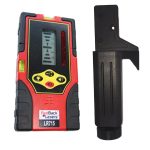 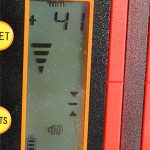 Another difference between these two receivers is the size of the reception window.  The LR715 has a  50mm reception window and the LR720 has 110mm which is more than double.  The LR720 will display up to +45mm and -45mm beyond that it will indicate “OUT” meaning its above or below this value.  The LR720 operates with both Red and Green beam rotating lasers on both class II and 3r (3a) laser outputs.

Why a millimeter readout?

Why would you want a Millimeter readout?  There are a number of applications that this could be handy.  One is when roughly levelling ground works you may want to work within a plus or minus 10mm tolerance.  This is extremely quick and easy with the LR720 millimeter receiver as it displays this information.  With a standard receiver you will tend to be working to a 1mm, 3mm or 5mm tolerance depending on the accuracy setting.  So you will be spending time working to a finer tolerance that you may actually need.

Another example would be for fit out applications such as windows.  Here you may find the one side of the window fitting is 5mm higher the the other side so you will instantly know that you will need a 5mm packer for that side.

The RedBack LR720 millimeter receiver will operate with most red and green rotating lasers by other manufactures.  For details on purchasing the receiver on its own click HERE