RedBack Lasers announces it new auto levelling 360 degree line laser range. These lasers are incredibly bright and clear for all your indoor installation and fit out applications. Available as either 1x 360 line, 2x 360 degree line or even 3x 360 degree lines and available in Red or Green lasers. The 3 line models provide horizontal level, two vertical 360 lines at 90 degrees giving vertical alignment, squaring and plumb floor to ceiling. Many of the models in the range even have the ability to operate outdoors in full sun using a line receiver and these models can be purchased with the laser now or added later. These models are not just bright indoors, they offer superior range outdoors using the electronic receiver up to 300m diameter shaming some rotating lasers. 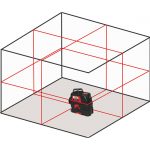 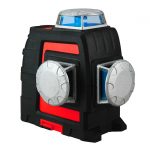 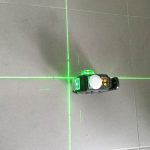 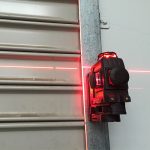 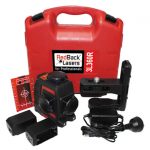 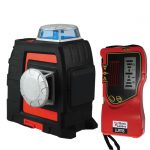 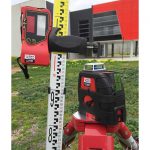 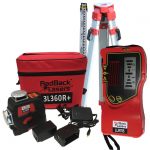 Every model in the range include as standard Li-ion rechargeable battery and charger which provides up to 20 hours of continuous operation.  Each model also includes a standard “AA” battery holder as a back up for when someone forgets to charge it up.  The battery can be charged outside of the laser interdependently.  So you can carry on working using the standard “AA” cells while it charges.

Build quality of the 360 degree line laser is is extremely good with a rubberised housing on a think plastic casing.  The laser outputs have cast metal covers providing protection for any knocks and minor drops.  All models in the range are easily calibrated if the need arises, something other manufacturers make difficult.  The RedBack L360 models all feature pendulum lock as standard providing maximum protection for your tool when in between jobs again something not all manufacturers do.

The 1L360R+ model has ultra bright horizontal 360 degree laser line for indoor levelling jobs.  But it comes with electronic receiver LLR705 which makes it an ideal laser for outdoor levelling. Such as general site levelling, slabs for house or sheds, decking, landscaping and more.  The 3L360R and 3L360G models are the ultimate indoor laser providing every feature you could want.  From level to vertical align to plumb and squaring.  The 3L360R+ includes a receiver so makes the ultimate indoor laser also a very useful outdoor laser.

For a comparison of the full range check HERE

Or stop by your local store and see one in action, you will not believe how bright they are. STORES