The True Story of a Dropped RedBack 3L360G laser level

Tools get dropped all the time, for a hammer or screwdriver this is not a problem.  For a precision laser level its not a recommended thing to do and sometimes results in buying a replacement laser level.

Here at RedBack Lasers we pride ourselves on supplying lasers built to the highest possible standards.  Many of our laser levels have a full steel safety cage chassis inside to provide maximum protection if dropped, knocked over or even run over.

In this case the laser in question was one of our new 3L360G 3x 360 line ultra bright green beam lasers.  The laser had suffered a major drop from a substantial height onto a solid surface landing on its top. 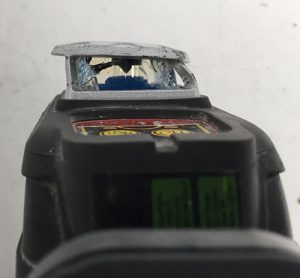 For many lasers being sold these days that would be the end of the story but for this RedBack laser things are not as bad as they may seem.  First of all the RedBack 3L360G has a cast metal housing over all three of its laser outputs.  As can be seen in the picture this housing, together with the glass, absorbed much of the energy.  On closer inspection the housing did not end up touching the laser output below it and the pendulum mechanism still moved freely.  Further testing showed that all, bar the horizontal beam, functioned.  These were all very good signs.

First thing to do was to remove the damaged top cast metal cover.  On a RedBack 3L360G Laser this is pretty strait forward operation with just 4 screws. 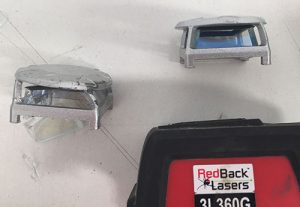 After cleaning pieces of broken glass we then repaired the non functioning horizontal beam.  This turned out to be a simple detached fine hair wire.  Next the 3L360G was put back together and calibrated.  Again with a RedBack line laser calibration is simple as all our models have easy access calibration access holes, with dust covers.  Many others do not have this and so makes calibration a much harder process and some near impossible.

With calibration complete it was ready to ship and a very reasonable cost, far, far less than replacing the laser. 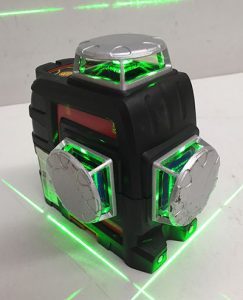 RedBack Lasers are not the same as many others out there on the market.  RedBack are built tough and designed to be repairable even after pretty major accidents such as with this 3L360G.  This laser was back hard at work after just a few days at at minimum cost to the owner.

RedBack Lasers, not a just power tool company that also sells lasers but, a true Laser Level Specialists.  All RedBack Lasers are checked and Calibrated in Australia prior to dispatch, full in house service facility for calibration and repairs.

Want to buy one of these lasers in either ULTRA bright Red or Green Beam?  Check out the range HERE